The midnight sun is a natural phenomenon occurring in summer months at places north of the Arctic Circle and south of the Antarctic Circle where the sun remains visible at the local midnight. Around the solstice (June 21 in the north and December 21 in the south) and given fair weather, the sun is visible for the full 24 hours.

The number of days per year with potential midnight sun increases the farther towards either pole one goes. Although approximately defined by the polar circles, in practice midnight sun can be seen as much as 90 km outside the polar circle, as described below, and the exact latitudes of the farthest reaches of midnight sun depend on topography and vary slightly year-to-year. 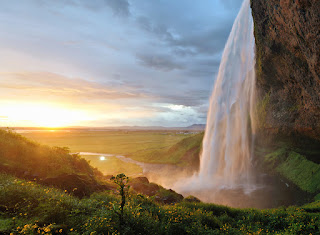 During summer the nights are bright in all of Iceland. In the month of June the sun never fully sets in the north. There are even special excursions to the island of Grímsey on the Arctic Circle where you can experience the midnight sun. Keep in mind, however, that the sun at midnight is not as warm as at midday, so bring along a sweater.

Sun hours per day in Iceland


The northernmost coast of Iceland is just kilometres below the circle, and during the months of June and July the sun barely disappears below the horizon. This period of ‘golden light’ is perfect for some creative photography and allows for longer days of exploration!

Many find it difficult to fall asleep during the night when the sun is shining. In general, visitors and newcomers are most affected. Some natives are also affected, but in general to a lesser degree. The effect of the midnight sun, that is, not experiencing night for long durations of time, is said to cause hypomania, which is characterized by persistent and pervasive elevated or irritable mood. 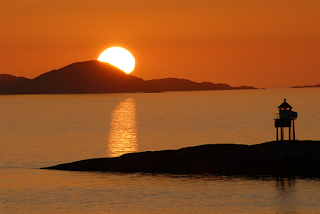 During the summer months of the midnight sun, Icelanders and tourists alike can enjoy special events and regular daytime activities such as golfing, swimming and running throughout the night. The 2013 Suzuki Midnight Sun Run will be held on June 24, 2013 in Reykjavik, and runners can participate in 5k, 10k or half marathon races. After the races, runners celebrate at the outdoor geothermal swimming pools at Laugardalslaug. Visitors can also experience midnight golfing at the Akureyri Golf Club's Arctic Open Golf Championship a few days later on June 27-29, 2013.