Iceland has a great variety of beautiful and powerful waterfalls all around Iceland. Some are hidden in canyons or in the highlands but others are right by the round road. Here I’m going to guide you to Iceland’s favorite waterfalls, where they are and how to get there. At the bottom of the article there is a map to give you a overview of the these great natural wonders. 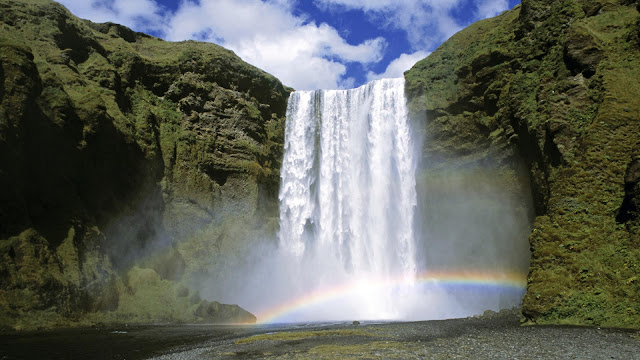 Gullfoss waterfall is located in the southwest Iceland, in the canyon of Hvítá and is one of the three stops in The Golden Circle (including Þingvellir and the geysers of Haukadalur).

Gullfoss is certainly among the most beautiful waterfalls in Iceland, hence the name Golden waterfall.

A century ago there were some plans of using Gullfoss or other parts of Hvítá to generate electricity by building power plants, possibly destroying the waterfall. One woman, Sigríður Tómasdóttir, was determined to preserve Gullfoss and threatened to throw herself in the waterfall. Fortunately, the plans were abandoned but a stone memorial is devoted to her.

How to get there: You’ll have to drive a little further than Þingvellir, pass Laugarvatn and Geysir and you will get there. The falls are well marked. The parking lot is right by the platform so no hiking is needed. 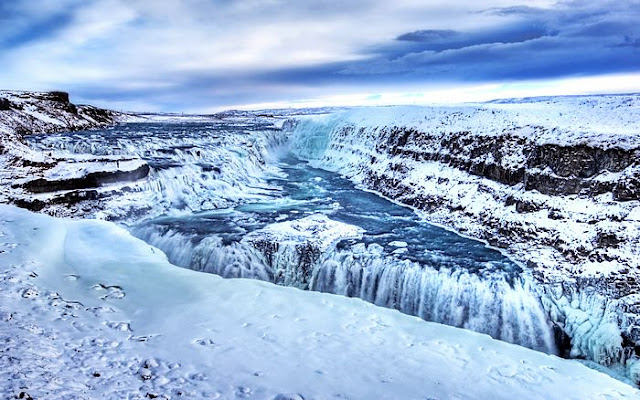 The falls drops 60 m (200 ft) over the cliffs of the former coastline of Iceland. During the ice age, a glacier covered Iceland and the weight from the glacier pushed the land down and made the coastline. The glacier than melted and the land rose, leaving the old coastline far inland. You can take a short walk on a walking path that leads you behind the falls, which is particularly beautiful during a sunset.

How to get there: It’s right by route 1 (the ring road) and you can see the falls from the road. Can’t miss it! 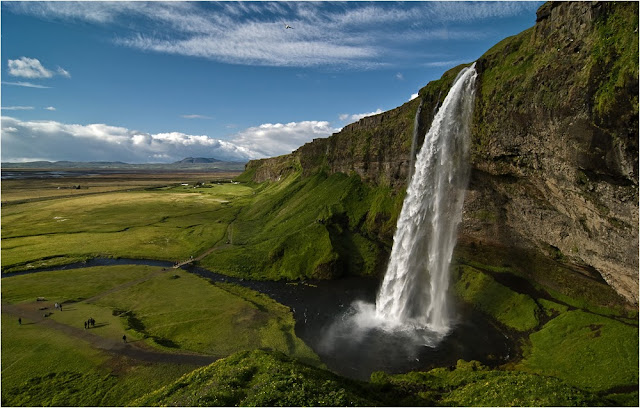 Skógafoss is located in the south of Iceland, a little further than Seljalandsfoss. The cliffs are a former coastline, much like Seljalandsfoss. Those cliffs, among other mountains, mark the borderline between the coastal lowlands and the highlands of Iceland. Skógarfoss is astonishingly white.

According to the history, a Viking from this area, Þrasi Þórólfsson, buried a treasure in a cave behind the waterfall. Many years later a boy found the chest but was only able to grasp the ring on the side of the chest before it disappeared again. When you are looking at the waterfall, you can see that on its right side are steps that lead up to the upper end of the waterfall giving an amazing view of the waterfall and all around it. That is the beginning of a popular hiking trip over Fimmvörðuháls, between Eyjafjallajökull and Mýrdalsjökull and ends in Þórsmörk.

How to get there: The waterfall is right by the Round Road and is easily seen from it. 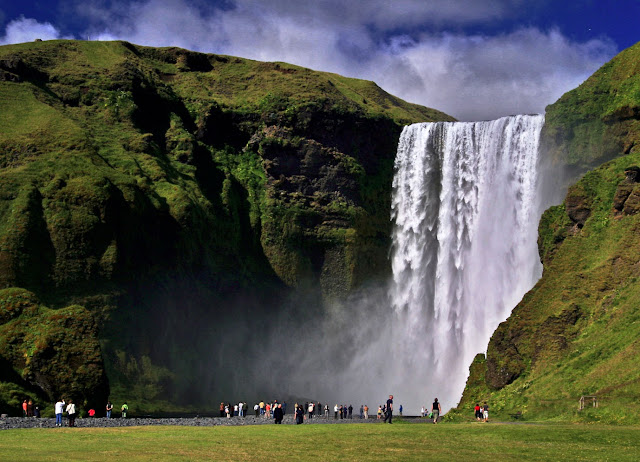 Dettifoss is a waterfall located in Northeast Iceland, in Vatnajökull National Park and gets its water from the river Jökulsá á Fjöllum, a river originating in Vatnajökull glacier.

Dettifoss is the most powerful waterfall in all of Europe and has an average water flow of 193 m3/sec. The falls are 100 m wide and the fall is 45 m down Jökulsárgljúfur canyon.

How to get there: You can drive up to the waterfall. However, drive carefully, the last spot is a gravel road. It’s best to see this powerful waterfall from the east bank. There is a panel, which gives a great view over Dettifoss and tracks around it to more points of view. 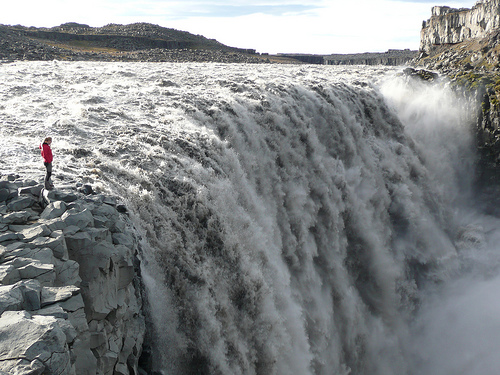 Goðafoss is a waterfall located close to Mývatn in the Northern part of Iceland.

The waterfall gets its name from an old story about the Law speaker Thorgeir Ljósvetningagoði. He made the decision that Christianity should be the official religion of Iceland in the year 999 or 1000. This decision was controversial in the Viking times. It is said that on returning back home from Althingi after his conversion, Thorgeir threw his statues of the Viking gods into this waterfall.

How to get there: This beautiful waterfall lies right on the ring road (Road 1) so you can’t miss it. 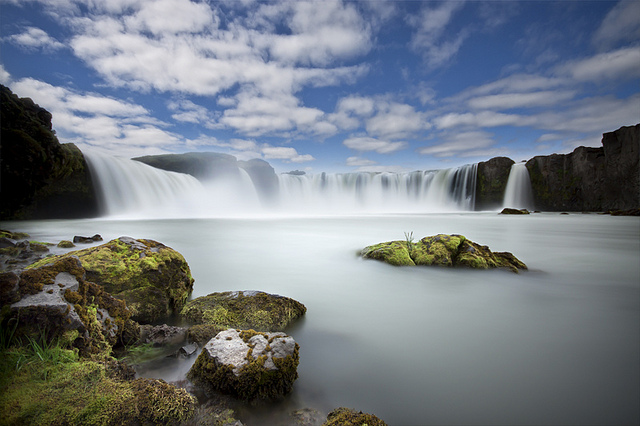 The waterfall Glymur is Iceland’s highest waterfall with 196 m fall.

It’s located in Hvalfjörðurin the western part of Iceland and takes less than an hour to drive from Reykjavík. Many tourists only go to see Gullfoss and Glymur often is forgotten. The hike up to the waterfall takes about an hour and it’s great to make a little picnic of the trip. The south and north roads start at the same spot but the south one branches off to the right. The best view is from the south side of the river Botnsá. But be careful, the south side trail is somewhat more difficult along the edges of steep drop-offs. When it drops over a small cliff face and descends through a cave down to the river, you can cross it to the southern side.

How to get there: You will have to drive to the end of Hvalfjörður (don’t take the tunnel) and hike from there. The waterfall can be accessed from Botnsá parking area and you can hike up from there on marked hiking paths.

At one and a half hour's drive from Ísafjörður, Dynjandi is perhaps Iceland's most picturesque - a bold statement for sure, especially since there are many contenders, but it's hard to disagree when you stand in front of the majesty of "Thunderous".

Actually Dynjandi itself is only the tallest in a series of seven waterfalls collectively called Fjallfoss, but while the top one gets all the photo attention, the smaller waterfalls you'll pass on your short hike to the top certainly add to the charm.

There are plenty of beautiful sights on the way to Dynjandi, most notably the stunning fjord trio of Önundarfjörður, Dýrafjörður and Arnarfjörður. You will get enough time for photo stops and also time at Dynjandi to enjoy the views. On the way back we stop at Þingeyri village. 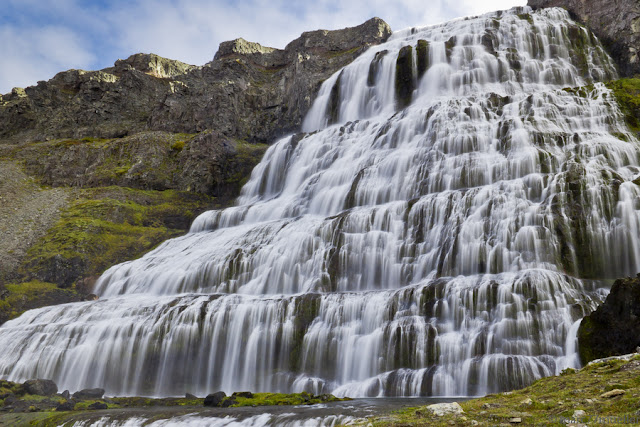