Modern depictions of this Yule Lad show him as a very skinny guy licking a wooden spoon, but actually the spoon was not a spoon. It was a Viking age (and later) kitchen tool called a "Pot Scraper." This was a very long and skinny kitchen tool with a tip that was more like a very small, flat and narrow spatula rather than a spoon. It was a "þvera", pot scraper.

This goes back to the days when you did not waste food. So when you made soups and stews and porridge in Viking Days, you always needed to have them warm and ready to serve. This was specially so in the Mead Hall when you needed to have some warming food always on hand for people who needed it, whether it was a rescue crew going out on a mission or a traveler who stumbled into town and needed some hot, good food to warm up after a long journey. Hospitality to strangers was a point of pride for Vikings, so that kettle of hot, freshened soup or stew or gruel was vital. 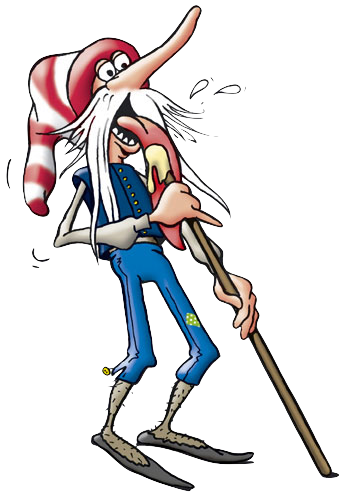 Þvörusleikir loves to steal the Þvera pot scraper from the Mead Hall and all the various households each night. He sticks each household Þvera in his mouth and licks it, pulling out the flavors of the stew or porridge.

It's not that efficient, and the other Yule Lads point this out often to Þvörusleikir. There just is not that much nutrition you can get out of licking a pot scraper or spoon or ladle. You'd do better to just pony up and buy a tasty, nutritious bowl of soup or stew.

But Þvörusleikir has his pride. He feels the wood of the þvera and the ingredients soaking into it somehow give it a real gourmet status. When you lick the þvera you bring out all the hidden flavors and have a true Michelin 4 star experience in gourmet spoon licking.

So, there's no use for it. Þvörusleikir lives on licking each household´s scraper and he is one skinny dude since there really is not a whole of nutrition coating the average Þvera or spoon or ladle.

Well, that's what happens on between Dec. 15 and Dec 28. Hang onto your ladles and wooden kitchen spoons because they are a hot commodity when Þvörusleikir is on the prowl!

The fourth, Pot-Scraper Licker,
Was a very skinny lad.
And he was very happy,
When the cook went away.

He ran like lightning
And grabbed the pot-scraper,
Held it fast with both hands,
As it was sometimes slippery.