Gáttaþefur (Door Sniffer) is a big-nosed fellow that, instead of developing a nose complex and turning to rhinoplasty, used his protuberance to his own advantage.

Gáttaþefur ‘s nose not only is noticeable enough to make any Cirano look like a mere amateur, but it is also extremely sensitive: this dude can smell Christmas delicacies as accurately as a truffle hog. But Gáttaþefur doesn’t care much for truffles. He prefers laufabrauð (the traditional Icelandic bread that is eaten during the Christmas period), cookies and cakes. And of course when he finds something edible he likes, he doesn’t content himself with the smell… 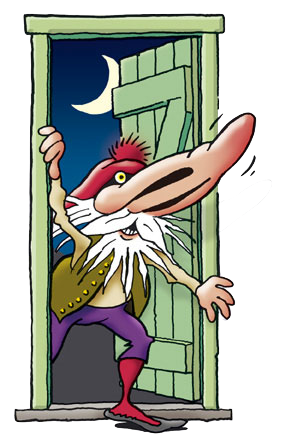 Gáttaþefur will be around sniffing on the night of December 22. Be sure to lock all your cookies in a safe if you don’t intend to eat them all before this darling arrives.

Eleventh was Doorway Sniffer
- Who never had a cold,
Even though he had a funny
And enormous nose.

The scent of Leaf Bread
He smelled in the hills,
And lightly, like the smoke,
He followed that scent.