It's Pottaskefill, the pot licker. Most of us, admit it, are not fond of leftovers (spam hash, anybody?). This Yule Lad lives for them! He patiently waits until households are finished with their cooking. Then he sneaks in and demolishes the leftovers in the pot with lightning speed.

His job is easy to do with the normal Viking household, but the Vikings on Berk are quite well grown, and the chances of leftovers are not great. 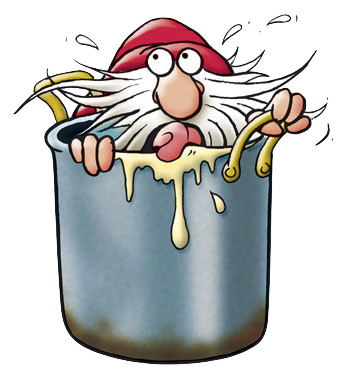 But Pottaskefill has picked up a few tricks over the years to guarantee he gets leftovers. Vikings had a notorious love of seasoning, gaining new tastes as they traveled on trading missions and their raid- oops, I mean, acquiring new possessions without paying for them. A wealthier household might have spices such as cumin, pepper, saffron, ginger, cardamom, cloves, nutmeg, mace, cinnamon, anise-seed, and bay leaves. In fact, Scandinavia is one of the few regions outside of South Asia that uses cardamom as a staple spice.

Anyway, like a Viking trader, Pottaskefill has collected his own formidable armada of seasonings from his visits. He has strung them onto a bandolier like vest that he wears when he visits Berk. And he uses them liberally and inappropriately (lots of salt in the deserts, honey and cinnamon in the meat soup, etc.). And lots and lots and lots of hot peppers.

Top it off with a few extra logs to insure the fire will burn the food, and Pottaskefill has guaranteed leftovers! It's a good thing he has developed a cast iron stomach over the years. Some of the other Yule Lads and Grýla have noticed, actually, that he no longer can eat food if it tastes good.

The fifth, Pot Licker,
Was a weird cool lad.
As the children received scrapings,
He knocked at the door.

They rushed off to see
If a guest was dropping in.
Then he hurried to the pot,
And had a filling meal.