This is the day for Skyrgámur, the Skyr Gobbler.

Skyr (or farköst) is a type of cheese, though it more resembles a very thick yogurt. The Greek yogurt that has become so popular lately resembles it, but not exactly. Skyr tastes tangy, thick and rich, yet it actually is low fat.

Like yogurt, you need to use a "starter" culture from a previous batch of skyr. Milk with all of the cream skimmed out is mixed with buttermilk, rennet and a bit of older skyr culture and brought to a boil. It is allowed to cool down slowly so the rennet can "work its magic." A curd and whey has been created. The mixture is strained through something like cheese cloth until all the whey has dripped out. (The whey is saved as a preservative for meats). The remaining "curds" are skyr. 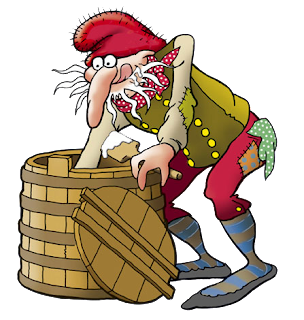 Skyrgámur is not the brightest Yule Lad in the litter, and after a full year of doing other things (he is into collecting snow in the winter and dew drops in the summer and his collection keeps getting stolen by someone mysterious), he often forgets exactly how to do his job. Eat it, play with it, throw it at someone, decorate it? His Terrible Terror friend is just as forgetful but still 100% of a prankster. Deadly combination.

They call him stupid, but apart from his lack of temperance Skyrgámur is not that stupid. For those who are wondering, skyr is a low-fat and very high in proteins dairy product, similar to strained yogurt, but much healthier. Thanks to its components, skyr’s nutritional benefits are quite remarkable.

So if you don't want to share any of your cultural experiences with Skyrgámur, hide your yogurt, skyr, buttermilk, filmjölk, kefir and sour cream from sight between Dec 19 and Jan 1.

Skyr Gobbler, the eighth one,
Was a terrible bull.
The lid off the skyr tub
With his fist he smashed.

Then he gobbled up
As much as he could,
Till he was close to bursting
And moaned and grunted.