Húsavik is a small town with 2500 inhabitants located in the north of Iceland. According to the “Book of Settlements”(Landnámabók), Húsavík was the first settlement in Iceland colonised by Scandinavia. This small town today lives mainly from tourism and fishing.

The wooden church of Húsavík is a little architectural gem from 1907. In winter, you can go skiing in Húsavík and also experience the Northern Lights. In any season, you can visit the museums in town, the most popular being the Whale Museum. There’s also the Museum of Exploration. 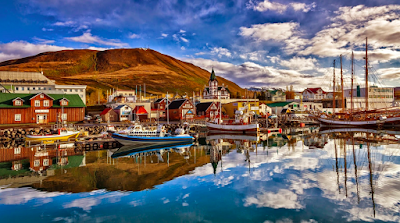 The famous Icelandic Phallological Museum (a collection of more than two hundred penises from varies mammals) was born in Húsavík, then in the height of its popularity was transferred to Reykjavík in 2013. The Fjúk Art Centre offers exhibitions and artist residencies. Hotels, guesthouses, shops, cafes and restaurants scatter around the small town. Húsavík is neither large nor the most entertaining town in Iceland, but it is a rather charming little place and deserves to be known.

Húsivík town holds an annual festival called Mærudagar, on the last weekend of July; the city divides into three areas and each area with a different colour. The people take great pleasure in decorating their neighbourhood with flags, banners and balloons pink, green and orange. 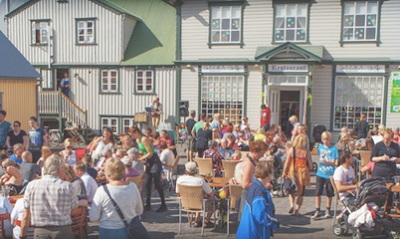 It is a festival that brings together the people of Húsavík and  those who have connections there. One can enjoy a varied musical program, and other attractions take place near the port. In 2016, the festival will have its 22nd anniversary leaving the little town buzzing for days, like in the years before.

In Húsavík, best known as the European capital of whale watching,  you can whale watch from May to October, and take a boat starting from Húsavík where you can delightfully sail around the beautiful bay of Skjálfandi. There is so much to see! In particular,  you can observe Lundey Island (Puffin Island) where thousands of birds find refuge every summer. 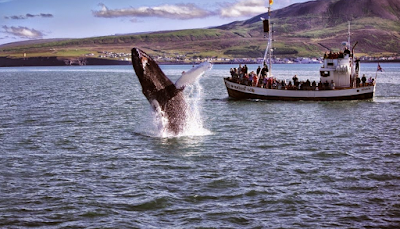 If you come from the east and Myvatn, Husavik can be reached on the road number 85, much of which is missing asphalt. If you arrive from the west and Akureyri, you will cross the valley to join Kaldakinn on road number 85. Just before reaching Húsavík town,  you will find a hot water bath installed by residents( initially built to relieve a skin infection).  Around Husavik, there are many fantastic places to visit: Myvatn, Asbyrgi, Dettifoss to name a few.