While surfers have been wandering the globe in search of perfect waves for a solid 50 years now, until recently, in order for a place to be considered a surfing mecca it had to meet the idyllic tropical threshold: swaying palms, warm water, powder-white beaches. It’s no wonder places like Tahiti, Fiji, and Indonesia have well-beaten paths. But true adventurers are always on the frontier, which, in surfing circles, is getting pushed farther and farther away from the equator.


This movement has been fueled largely by incredible advances in wetsuit technology. Softer, lighter, more flexible rubbers that have been developed in Japan have been incorporated by every major wetsuit manufacturer, and subsequent advances in fit and ergonomics have dramatically improved comfort for surfers in cold locales. Today, a place like Iceland, which was once considered impossible to surf, is suddenly on the surf-adventurers map. 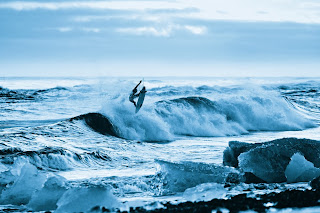 California’s Chris Burkard is one surfer who never let the cold stop him. “I grew up on the Central Coast of California, which has chilly water year-round, so that part never intimidated me,” he said. As a staff photographer for Surfer magazine, he doesn’t mind volunteering for assignments in the northern reaches. “Surfers are always wondering where the next perfect wave is going to be found, and there are still a lot of warm-water discoveries to be made, but the bottom line is there’s way more unexplored coastline up where things get cold and rugged, and that’s what lured me to Iceland,” he said. 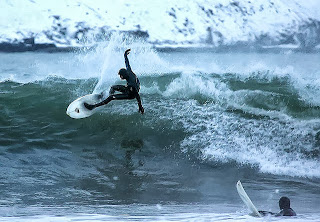 While he’s only made a few trips to the Nordic island, what Burkard has found will keep him going back for years to come. “I’m a lover of the outdoors, and this is wilderness surfing at its finest,” he said. Here are some of his images from his most recent visit. 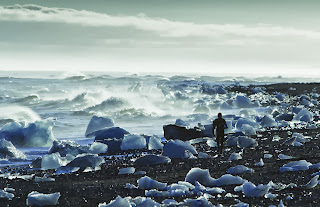 “There are very few places in the world where you can find ice on the shores of a beach with perfect surf. Walking around huge glacial ice chunks on the way to the water there was no question this was going to be the coldest session of our most recent trip to Jökulsárlón,” Burkard said. 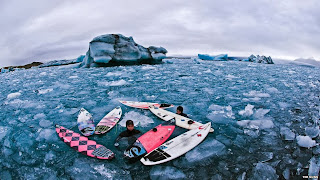 “In summer the water can be a toasty 47 degrees. But in the fall, when the swells get bigger, water temps drop into the high 30s.” 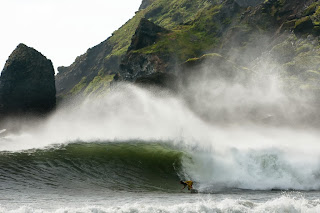 Sam Hammer has been surfing through New Jersey’s harsh winters for nearly 20 years, so he’s used to pretty chilly water. But you won’t find a scenic lineup like this anywhere near the Jersey Shore. 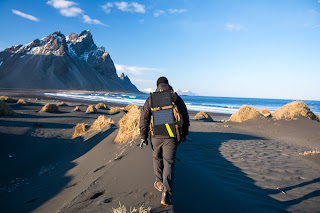 “We spent days wandering in places where you don’t even see signs of civilization,” explains Burkard. “I brought a Goal Zero solar pack just to keep my camera charged, and it quickly became the most prized possession within my crew, because everyone had gadgets that needed charging. Little things like that can become your lifeline.” 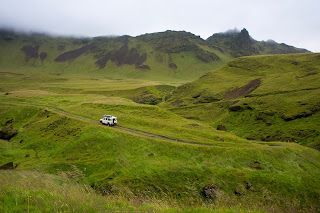 Driving is both heaven and hell in Iceland, but the scenery is always changing. One minute you’re on a black sand beach, the next a giant white glacier, and and hour later a sea of green. 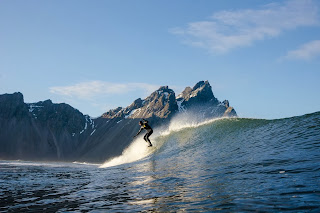 Shooting photos from the water in Hofn was surreal. “It was hard to imagine we were scoring waves at the foot of some of the most dramatic mountains I’ve ever seen,” said Burkhard. With the air temperature dropping below the water temp on this day, “The water felt surprisingly nice,” he added. 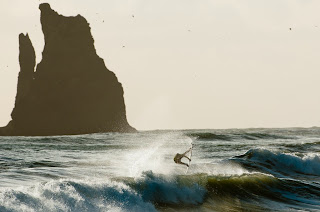 A decade ago wetsuits were so stiff and heavy guys like Alek Parker wouldn’t have stood a chance of being able to perform like this. Today’s suits have improved dramatically, allowing for a lot more fun, and opening the door for a lot more exploration. 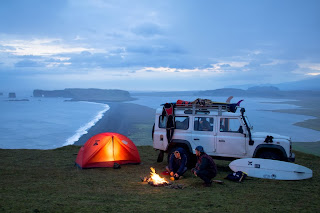 The best part of wilderness surfing like this is you get your pick of camp sites. Burkard and his crew always go for the ones with a view. 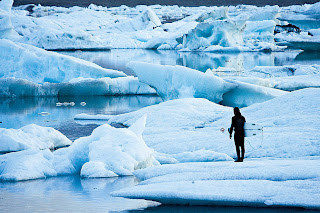 Low pressure systems spawned in Baffin Bay, wind up south of Greenland, before sending groundswells slamming into the Reykjanes peninsula, the first stop on the transatlantic swell highway. These swells can be giant and very powerful, building suddenly and they are often accompanied by raw winds and stormy conditions. 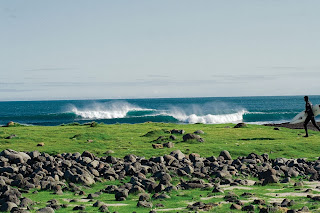 Winter is the most consistent swell season with excellent waves regularly hitting all sides of the Reykjanes. The problem in mid-winter is getting the right conditions to conspire in the very short span of daylight. Strong winds, chilling temperatures, snow storms and large tidal fluctuations are just some of the variables. September to November can be good months, with manageable air and water temperatures, and frequent low pressures. 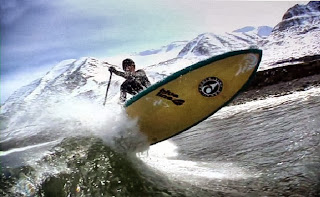 May-August sees plenty of summer flat spells in the southwest and could be a good time to explore the east and the north coasts for arctic wind swells. Tides exceed 5m (15ft) and there are only a few spots that can handle all tide heights. Even the main beachbreak at Sandvik struggles to break at high tide.