Route F26 or Sprengisandsleið is a highland gravel road in Iceland, running through the Sprengisandur area between the glaciers Hofsjökull and Vatnajökull.With its 200 km, it is the longest of the Icelandic highland roads. Its southern end is at the lake Þórisvatn, to the northeast of the volcano Hekla, and its northern end is the lower part of the valley of the river Skjálfandafljót, to the southwest of lake Mývatn. 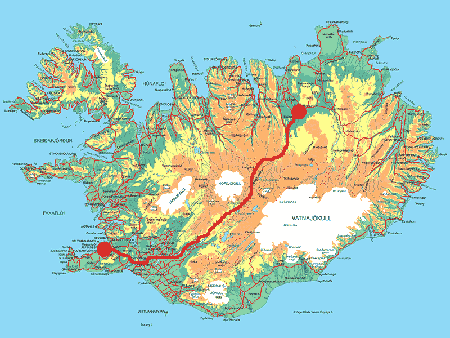 In earlier times, when people were more superstitious than they are nowadays and believed in ghosts, giants, elves and outlaws, the few who dared use this route rode as fast as possible through and sometimes exhausted their horses. The word for to exhaust in Icelandic is "sprengja", hence the name of the area. 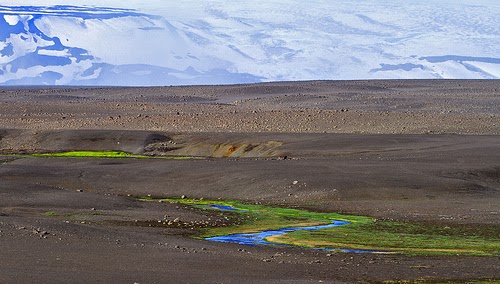 Although providing something of a corridor in Viking times between Iceland’s northeastern settlements and the summer parliament at Þingvellir, crossing Sprengisandur was always a tough journey, the desert flooded in spring with melting snow and ice, yet too dry in summer to provide any grazing for horses. Indeed, most travellers preferred to take much longer coastal roads, and Sprengisandur was eventually abandoned as a route during the thirteenth century. 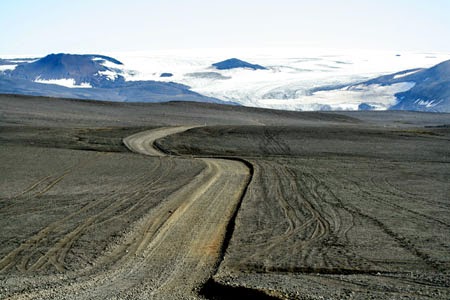 Traversed today by the F26, which begins northeast of Hekla and runs some 244km to the Ringroad at Goðafoss, the Sprengisandur route remains a challenging one, whose unbridged rivers and stark scenery provide an insight into medieval Iceland’s harsh living conditions. Sprengisandur’s southern gateway is marked by Hekla, north of which is the desolate, icy plateau between Hofsjökull and Vatnajökull.

The enduring image here is of nothingness: the glaciers and mountains that fringe the horizon seem a long way off, and the space in between is filled with mile after mile of grey sand, stones and rocks that have lain untouched for thousands of years. 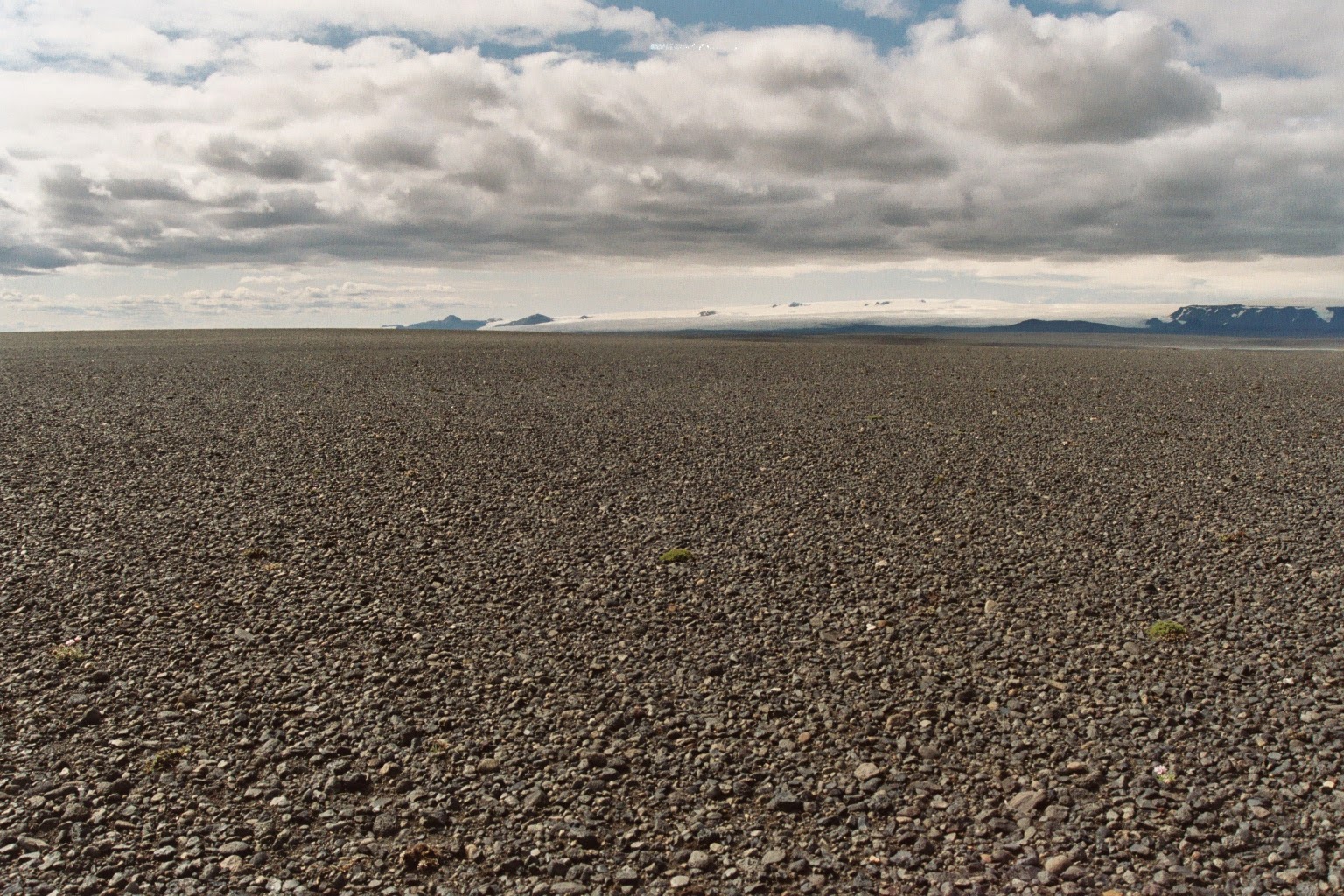 Hrauneyjar Highland Center, a year-round highland oasis at the southern terminus of the Sprengisandur Route, has two hotels and restaurants, an information desk, and the last gas station for the next 240km (149 miles). A trail map of the surrounding area is available at reception.

As a base, Hrauneyjar is best for travelers with their own 4WD transport. The Highland Center organizes tours only for groups, and the best local destinations -- such as Veiðivötn lakes, or the lovely Dynkur, a waterfall on the Þjórsá river -- are inaccessible to regular cars. 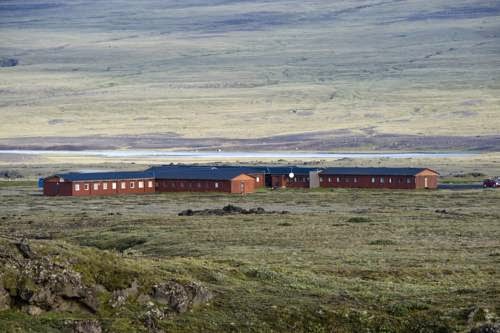 Veidivötn. Trout fishermen are particularly drawn to this idyllic and peaceful cluster of fifty volcanic crater lakes, located close to Landmannalaugar but accessed through Hrauneyjar on Route F228. 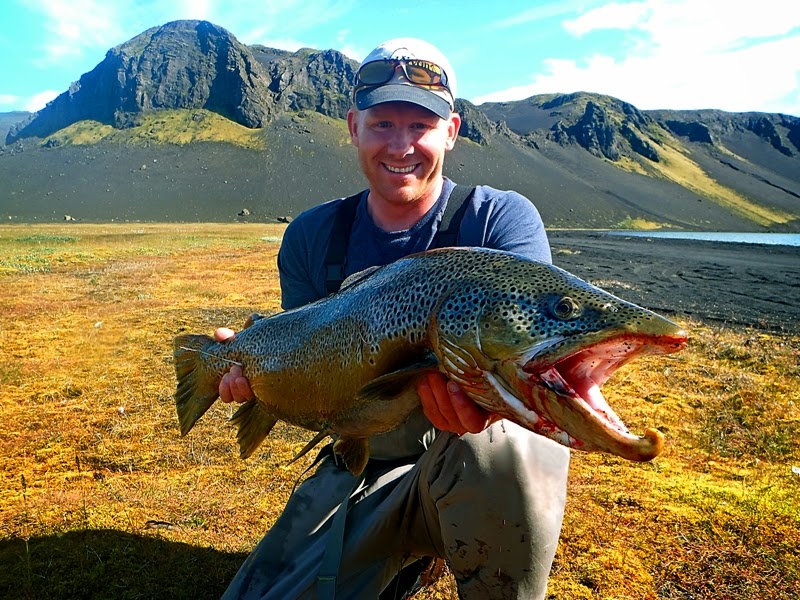 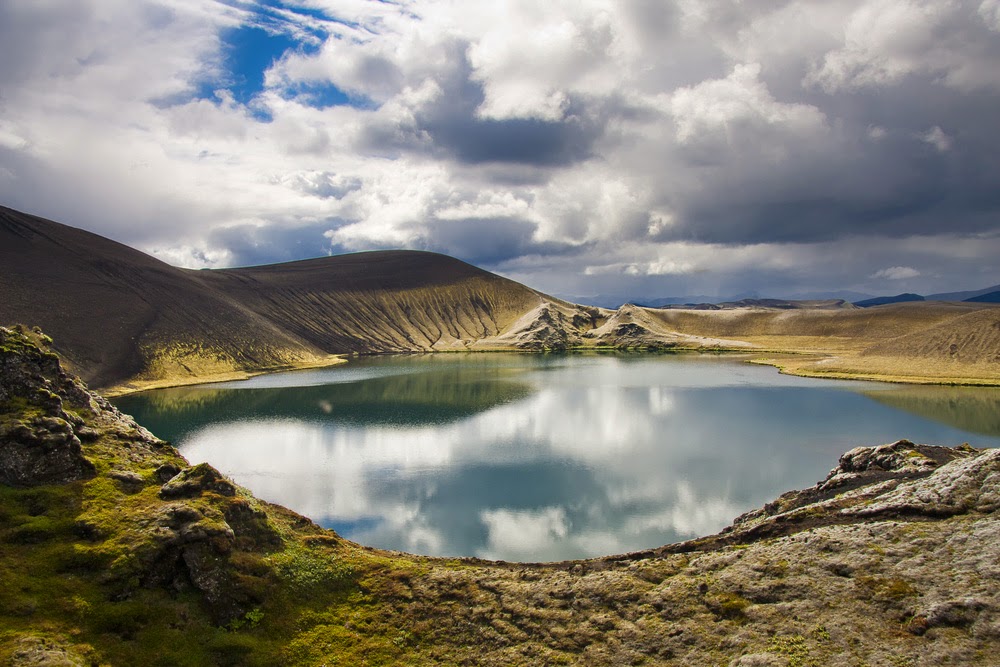 Nýidalur. An overnight stay at this remote desert outpost, combined with a day hike east to Vonarskarð pass, makes for a memorable episode along the Sprengisandur Route. Nýidalur is right on Route F26, about 100km (62 miles) from Hrauneyjar and 20km (12 miles) from the northwest corner of Vatnajökull.

Vonarskarð forms a dramatic saddle between Vatnajökull and the small glacier Tungnafellsjökull, and the hiking route skirts some restless geothermal fields. Sudden releases of glacial meltwater can make stream crossings difficult, so speak to the warden before setting out. Those just passing through Nýidalur can still take the short easy hike east to a nearby hill with panoramic views. 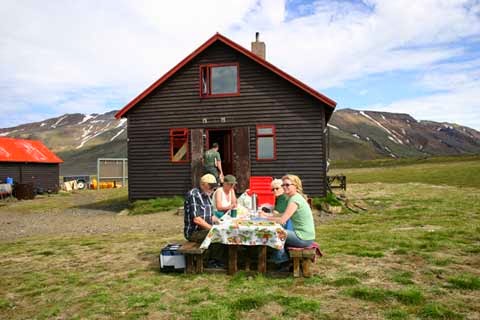 It is the longest stretch between the South and the North and is only passable by 4wd vehicles during summer. The obstacles enroute are rivers, which have to be forded and the water can be up to 1 meter or more (specially it's the 1 river crossing 5 km before you reach Nýidalur). For a person that is not an experienced off-road driver, anything smaller than Land Rover/Toyota Land Cruiser is not recommended at all. 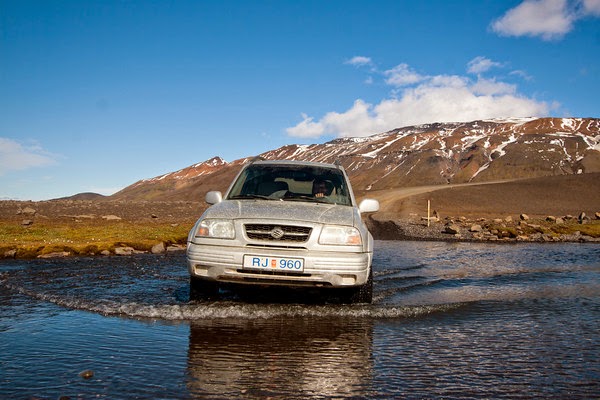 They swell when it is warm, the glacial meltwater increases and when it also rains they become dangerous. The scenic beauty makes this route unforgettable.

Warning: Gas is not available on Route F26, and the gas stations at Hrauneyjar and Goðafoss are 240km (149 miles) apart (Unprepared drivers are often seen begging for fuel at Nýidalur).

This part of the Interior offers a great variety of possibilities for short or long hikes. In most cases it depends on the individual traveller to decide which hillock or mountain is the best vantage point, or how far to go into the wilderness.

Long hikes require good planning, preparations, and physical fitness. The psychology has to be considered as well. 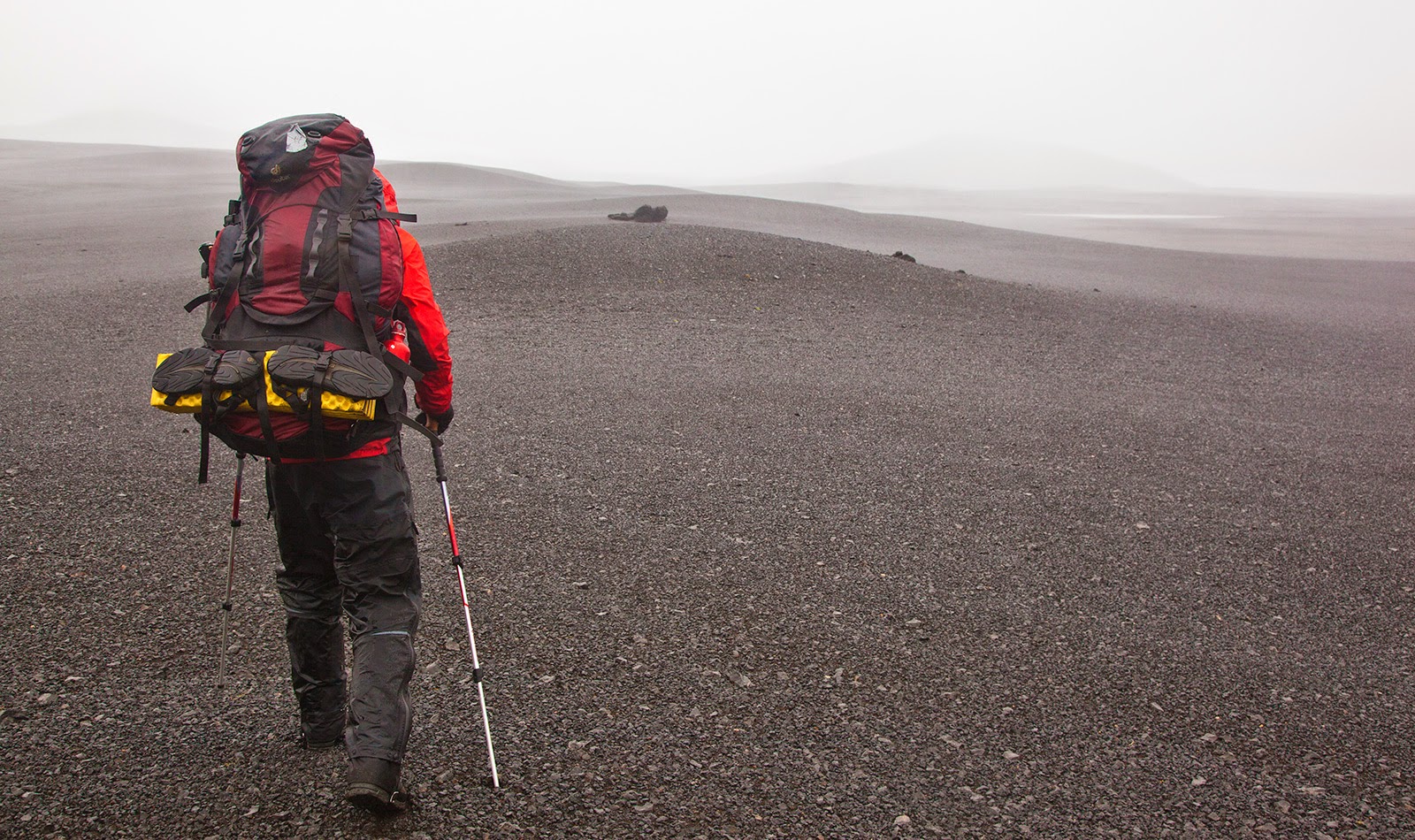 Sometimes the vast, barren landscapes, and the solitude overwhelme hikers, who are travelling alone and do not meet a soul for days on end.

The full one-way trip lasts 10 hours and costs 8,000kr ($128/£64), with stops at Hrauneyjar, Nýidalur, and Skútustaðir, plus sightseeing breaks at the Aldeyjarfoss and Goðafoss waterfalls.

Passengers taking the bus from Mývatn to Landmannalaugar must wait until the following day for connections to Reykjavík and elsewhere. 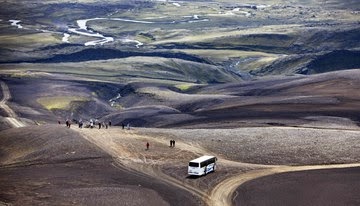 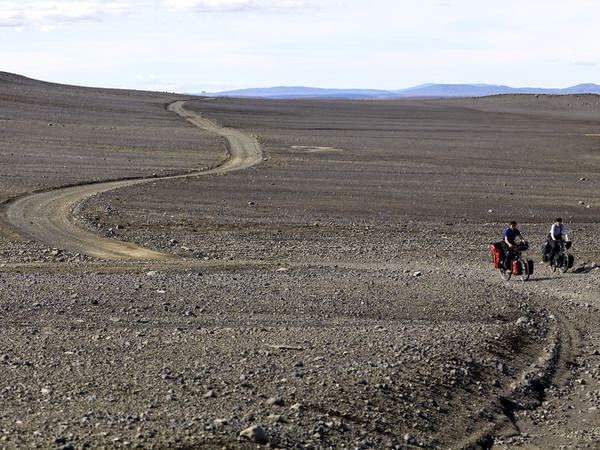 No specific tourist information office is assigned to the Sprengisandur Route, but regional offices in Hveragerði, Varmahlíð, Akureyri, and Mývatn can provide help. 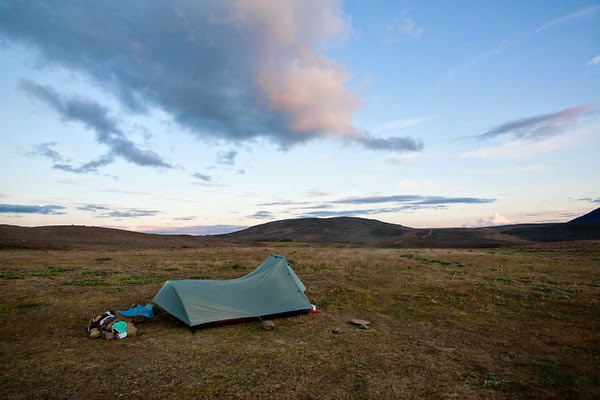 The Hrauneyjar Highland Center (tel. 487-7782; www.hrauneyjar.is) is a useful resource, and the warden at Nýidalur (tel. 854-1194; July-Aug) -- while not responsible for helping non-guests -- is usually happy to answer questions.