Dimmuborgir, "dark castles", is a volcanic formation zone in the North of Iceland and is one of Iceland's most visited attractions. These unusual lava structures are a must see when you visit the Myvatn region. 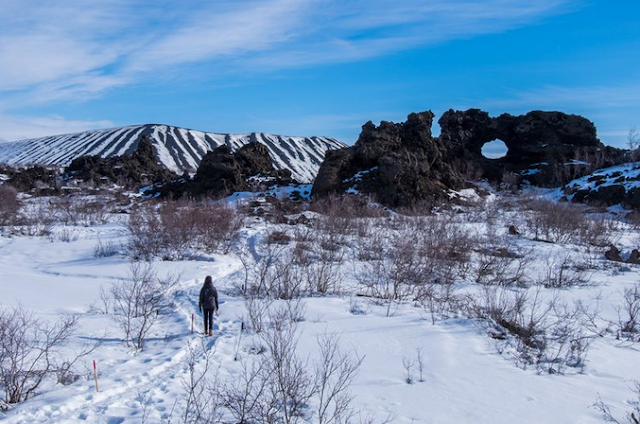 Dimmuborgir, located ten kilometers south of the village of Reykjahlíð, is an area known for its volcanic activity. Dimmuborgir formed over 2,300 years ago, during a long and violent volcanic eruption when an impressive volume of lava flowed into a twelve kilometer long crack in the ground, south of the crater Hverfjall (or Hverfell), and joined the valleys of Laxárdalur and Adaldalur. Geologists agree that something blocked the lava flow, resulting in the creation of a lava lake.  When the lake began to cool and solidify, the mysterious blockage was released and passing out lava, which then solidified creating the lava sculptures that you can see today.

The Dimmuborgir region is recognizable by the large hollow tube structures that formed when lava pooled over a lake resulting in these spectacular lava pillars. Some "chambers" of lava are large enough to hold one or more people, and that's why the area was named “dark castles" The unusual shapes of lava give an air of mystery and magic to this place. 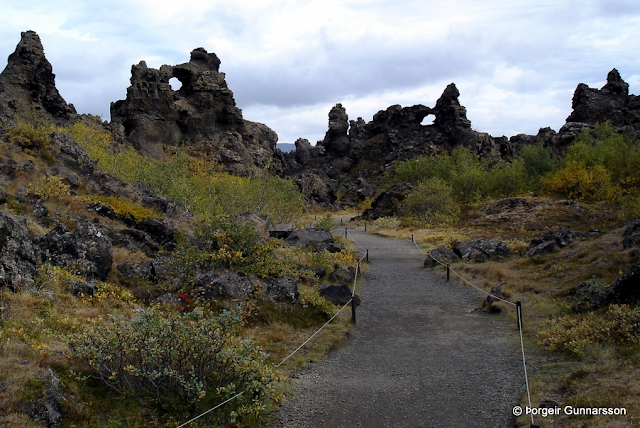 Walking, photography, observing nature and the local plant-life are the main activities in the surroundings area of Dimmuborgir. Some small walking paths have signposts to Dimmuborgir, and whatever the time of year you can choose to be accompanied by a guide.
The small circle 570 meters takes around 10 or 15 minutes to walk.
The large circle 840 meters takes about 20 minutes walking.
The circle of the church, leading to the formation that looks like a church is 2250 meters long and is about 60 minutes on foot.

The Mellönd circle: 1200 meters takes about 30 minutes on foot.
Krókastígur, the zig-zag path: 800 meters takes around 40 minutes walking.  This way is a bit more challenging than other walking trails. You can also visit Dimmuborgir walking from the village of Reykjahlíð; the road is about 14 km long and takes 3 to 4 hours to get there.

Grjótagjá - Hverfjall - Dimmuborgir
The marked path starts in the village of Reykjahlíð, at the intersection of the number one road leading eastward from Egilsstaðir, Iceland. From there, the trail leads you to the cave Grjótagjá, where there are secret hot springs (too hot to bathe in). You continue your way up Hverfjall crater, where you'll discover a beautiful view of Lake Myvatn. You descend the other side of the crater on a stiff slope and continue to through the volcanic formations of Dimmuborgir.

You can also do the second part of this hike at Dimmuborgir, Hverfjall (or vice versa), which is eight kilometers long. When you get to Hverfjall, there are two paths; one easy, the other a harder zig-zag path that leads to the summit of the crater. 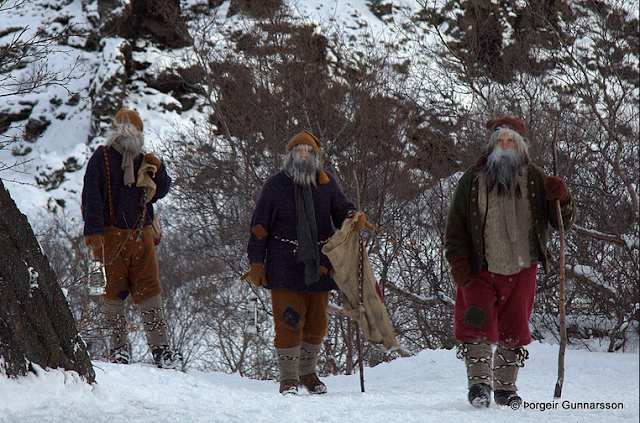 In December, the Icelandic Christmas Santas, invite guests to visit them in Dimmuborgir on a particular day to prepare for Christmas. They also take a dip with travellers at the Nature Baths.