Prettiest Churches in Iceland: Which Ones to Visit

A visit to an Iceland church is a must on every traveler's itinerary. There are so many beautiful churches in Iceland that it can be hard to know where to begin. It seems like every town or village has its own small place of worship. We've narrowed it down from the over 350 churches in the country to bring you this list of the prettiest churches in Iceland. 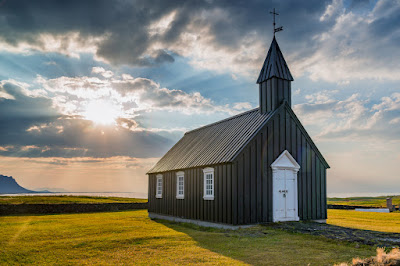 We've left out the more obvious Iceland churches like Hallgrimskirkja church in Reykjavik or Akureyrikirkja in the north of Iceland. We wanted to go beyond that and include some of the lesser-known, off-the-beaten-path churches in Iceland. Let's hit the Ring Road, start exploring Iceland's lesser-known countryside, and discover some real gems along the way.

Budir: The Black Church in Iceland


Probably the most well-known religious building with the country’s traditional style architecture is Budir church Iceland. Also known as Iceland’s black church, this is a popular stop for travelers visiting the Snæfellsnes peninsula.

This beautiful structure is exactly what it sounds like: a black church. With the exception of the white windows and front door, the entire church is painted black. This is surprising given the church's traditional association of evil or the devil with this same color. The church is also quite striking because it's in a pretty isolated area. As you approach it, all you see are the surrounding fields and this little black church.


As you wind your way along Iceland's east coast to take in its magnificent fjords, be sure to make a stop in Seydisfjordur. This town in eastern Iceland sits on the innermost part of a fiord and it's a lovely stop off close to Egilsstadir.

The Seydisfjordur blue church is one of Iceland's most recognizable landmarks and one of its most visited churches. The powder blue exterior and cheery rainbow path leading up to the church give the building a quirky and unforgettable look. The distinct color and traditional style make the blue church in Seyðisfjörður a must when visiting Iceland's prettiest churches.


While making your way through Icelandic villages, you might stumble across something you’ve never seen before. Iceland's turf houses are buildings made of wood, rocks, and stone which have turf covering the sides and roof. 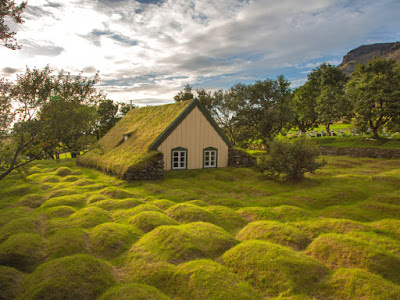 This unusual architectural style was originally developed in northern Europe. The insulation provided by this type of shelter protected locals from and their farm animals from harsh weather conditions. In some countries, this type of building has been around since the Iron Age.

This traditional architectural style was popular throughout the 17th century and into the 18th and 19th centuries in Iceland. Hofskirkja church in Hof, Öræfi was the last church built in the Old World style back in 1884. There are six turf churches left in Iceland that are still standing.

This particular Icelandic turf church is quite popular due to the fact that it looks as though it's emerging from the ground. We no longer build these rare types of churches and there's only a few left, so stop by to visit while they're still here.


While exploring Iceland Golden Circle route, many travelers decide to make additional stops along the way. In addition to Thingvellir National Park, Haukadalur geothermal valley, and Gullfoss waterfall, there are several other detours you can take.

One of these is the town of Skalholt for a visit to the Skalholt church in Iceland. The town's first church was built in the 12th century. It was the seat of power for the members of the clergy in Iceland for over 700 years. Although there have been 10 churches erected on this site, the one that currently stands here is a memorial cathedral.

When you visit, be sure to stop by the medieval tunnel and crypt mentioned in the Icelandic sagas. And take a look at one of the rare copies of the first edition of the Icelandic Bible.


I've included the Blonduos church on a list of Iceland's prettiest churches, but not because of its beauty. In fact, pretty or beautiful are not the adjectives I would use to describe it. But I do think that it warrants a visit, which is why I wanted to mention it.

The futuristic architectural style of this building makes it look more like a spaceship than a church. Much like Hallgrimskirkja in Reykjavik and Akureyrikirkja in the north, this Icelandic church was also inspired by the country's volcanic landscapes.

The slate gray exterior is meant to look like the dark surface of a lava field or perhaps the decimated grounds after a volcanic explosion. The church itself looks like a conical volcano with its top missing. It's meant to resemble a volcanic crater, and if it weren't for the large cross next to the structure you'd have no idea that it was a place of worship.

Church in Vik Iceland: A Spectacular View from the Hilltop


Another iconic church in Iceland’s traditional style is the hilltop Vik i Myrdal church. From this vantage point you have picturesque views of both the Atlantic Ocean and the sleepy fishing village below. This church is representative of the typical Icelandic style with the building painted white and a colorful red roof. If you're stopping over in Vik to visit Reynisfjara beach, be sure to drive up the hill to visit the town's iconic church. 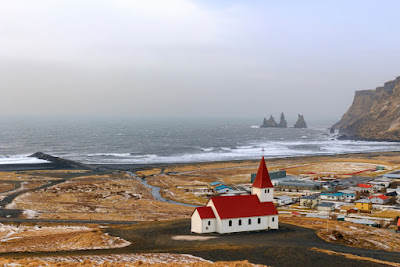 
Iceland converted from the old Norse religion to Christianity at the turn of the 11th century. It was a change inspired by convenience rather than a strong desire to embrace Christianity. As a result, some Icelanders continue to practice paganism despite it being outlawed. It never truly went extinct and has been having a comeback. In fact, the Ásatrú pagan religion has been the fastest-growing spiritual organization in Iceland in recent years.

They are erecting Iceland's first pagan temple in 1,000 years along the South Coast on Reykjanes peninsula. The construction site is about 13 minutes drive from downtown Reykjavik. The temple was originally supposed to open in 2018 and that was pushed to 2019. Check to see if it's open during your trip as this will surely be a unique experience.

The building is meant to be an Ásatrú sanctuary and the Ásatrú society practices the ancient Viking religion. They are a neo-pagan spiritual organization which worships the pantheon of Norse gods like Thor, Freya, Odin, and Loki.

The dedicated structure will be home to gatherings, religious ceremonies, and rituals known as blóts. Iceland’s pagan temple sits on Öskjuhlíd hill, a sacred area surrounded by forests with stunning views of the sea. The domed monument will be dedicated to the cosmic forces of nature.

Prettiest Churches in Iceland: Which Ones to Visit


Iceland has a wide variety of churches to visit. There are the imposing facades of the large churches in Reykjavik and Akureyri and the smaller more traditional architectural styles of churches like Budir, Vik, and Seydisfjordur. And of course, spectacular churches that you won't find anywhere else like the Blonduos church or turf churches. There really is something for everyone, it's just a matter of figuring out what you want to see and planning your itinerary.